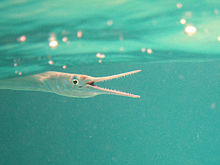 I didn’t see much of the town of Guaymas. It was actually on my way out of town, when I drove through its center that I saw what a pretty and typical Mexican town it was, much bigger than I originally thought when I first got in. Unfortunately I couldn’t take pictures as the traffic was too intense.

The town seems to have grown around the  local mountain called “cerro del tetakawi”, that in native Yaqui language means “cerro de piedra”, or in english “rocky mountain”

I was looking for a particular campground around the bay and found myself traveling down this beautiful scenic road along the shore.

When the road ended at a pier and I managed to turn my truck around without falling off the cliff, I retraced my steps in search of a free site where I could spend the night safely. I marveled at the number of beautiful mansions lining the road, most of them abandoned, some obviously not.

I stopped next to a marina for commercial boats to take a picture of all the pelicans and decided to talk to the guard and ask him where I could camp. The old gentleman sent me to the next bay over, telling me I would be safe there. When I arrived I was surprised to find, not a beach as I had assumed, but a small gated marina named El Mero. I decided to ask the guard if I could camp there and he waved me in with a big smile! Oh my god, I had found a gem. Private, secluded, quiet with a beautiful scenery! As for safety, I couldn’t have found better: gated and with a security guard! Wow.

I happily set up camp and settled in when a gentleman came over and introduced me to a sub-culture completely new to me: people that travel and live on their boats, the same way I travel and live in my RV! I was, after all not alone in my paradise. I had thought that the people milling about their boats were tourists with a villa in town, and that they would be gone by evening- but not so. They were to become my new friends for the next few days.

I’ve been sent over, he says, to figure out who the woman in the RV is. I forgot his name, but he tells me that originally Polish, he lived in Winnipeg for a number of years before starting to sail full time. He sold everything and has been sailing the world for 9 years now. He commented that a lot of sailors find out the hard way that the boats they have been using for the occasional sail are not designed for the high seas nor for living full-time but rather for berths in marinas. I understand this concept as it is the same for RVs set up for full hook-up campgrounds, versus the ones better equipped for dry camping such as mine.

Another person to pay me a visit as I was sun tanning in my bikini, where I thought was an out of sight location, was a Mexican hand, with his patron closely running behind saying “Roberto, I don’t thing your wife at home would approve!”

At $50 (pesos)[I know it is confusing Pesos is a dollar sign with only 1 /] a night El Mero is one of the cheapest and prettiest marina in Guaymas. Some of its residents have been here for over 1 year, either because of personal health issues as was the case of Jay or because of needed repairs or renovations, as was the case of most of the others. Most of them have been returning to this piece of paradise for years.

Knowing I was safe, I slept like a baby. I woke up early and decided to go out and wait for the sun to rise. It was still dark when I distinctly heard the very loud exhale from a breathing hole! It was so close I couldn’t believe it! I know of only 2 sea mammals that have breathing holes and the marina was definitively too small and shallow for a whale, so it had to be a dolphin. It leisurely came to the surface and breathed at very short intervals and I could see its wake, really close to where I was standing. What a magical way to start the day!

Locals came in to fish on the piers and would leave at dusk. My neighbors warned me to pack everything a night as thieves would come in by boat and snatch anything that was not bolted or tied up. Engine motors were a prime target. Apparently Guaymas is notoriously bad for boat thievery in both wet and dry marinas. They would boldly come on board as you are sleeping below deck!

I had arrived on the Sunday of a holiday long week-end. The week-end guard had let me in because he was not the one in charge of collecting the rent. On Monday I got the visit of the regular guard, Miguel. He told me that Campers were not allowed to park here and that I would have to leave or go to the main office to get a permit to stay. I didn’t know if he was implying that I paid him directly or not. Since the office was closed on Monday, I would get a lift to the office on Tuesday to sort it out. It turned out that I was not allowed to stay. That night had been quite windy and I had rolled up my awning. In the morning I thought that I could either leave right away and not bother going to the office, in fear too that they might charge me for all 3 nights, or go and find out about my options, in the chance that they gave me a permit showing the guard that I was cleared to stay, as per my neighbors’ assumptions. I was not ready to leave that day – I wanted to stay one more night before leaving the next morning so I was very disappointed to find out as I crossed the gates on my way out that all I had to do was bribe the guard!

I am still learning about customs here, as in pay half now, the other half when the job is done (I learned that one when I had my van painted. I paid him in full and of course he never showed up the next day to put the varnish top coat!) and as in offering a bribe to the security guard of a beautiful and cheap marina. Even at $50 (pesos) a night it is way cheaper than most RV parks that charge an average of $400 pesos a night! I beat myself up for this lack of judgement.