The reason for my daughter Tiffany to arrive in Belize City was simply so that we would go to Tikal. Tikal, the largest Mayan site in Central America, nestled in the northern jungle of Guatemala. I had been told, even before my departure for my long journey, that if I were to only visit one archeological site, it would have to be Tikal!

Crossing the border into Guatemala was a breeze other than the fact that we got completely ripped off by the money changers. It was my fault, I should have researched the exchange rates online ahead of time. Oh well ­-an expensive lesson learned!

By comparison, my friends Dub and Sheila crossed the border from Mexico in Tapachula and their experience was horrendous!  Trucks were being accosted by some 50 Guatemalans, hanging on to railings, side mirrors and climbing on the roof.  Their formalities were also very strenuous. A good thing that I didn’t experience any of this; I do not know how I would have handled a throng of people hanging on to my truck!

My concern with this itinerary was about the road conditions. There was nothing current online about the only road to and from Tikal. All I had were older accounts from books and blogs, describing the terrible dirt road. However, at various campsites I met people that had traveled to Tikal and were on their way back home reassuring me that the road was actually really good. It had been completely repaved a few years ago. Although a simple 2 lane road, it was free of danger and potholes. That’s all I wanted to hear!

We opted to stay at El Remate, the northern village on Petén Lake, the closest we could camp to Tikal since pets were not allowed in the park. We ended up finding this idyllic free spot right on the lake and every night we would swim in the deliciously warm water watching the sun set!

We were parked close to the French Hostel/Restaurant “Mon Ami” and decided to take advantage of their shuttle service to Tikal the next morning at 5:00 am in order to arrive at the park to see the wildlife at sunrise.

It was a wonderful drive in the wee hours of the morning, and already we could see women in little stands on the side of the road lighting the fire on their coal stoves getting ready for the morning crowd. It was misty and the vegetation got thicker and greener as we approached the gates. Once inside, we still had a good 30 minutes’ drive to get to the main visitor center.

Tiffany and I decided to hire a private guide for the tour. We figured this was a huge archeological site and after our wonderful experience with our previous guides in Belize, Russell – for our jungle walk and Luis – for the ATM caves, we knew that we would get more out of it. We also decided to do the tour in Spanish since we both needed the practice. 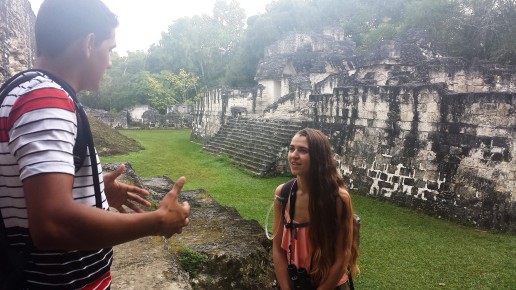 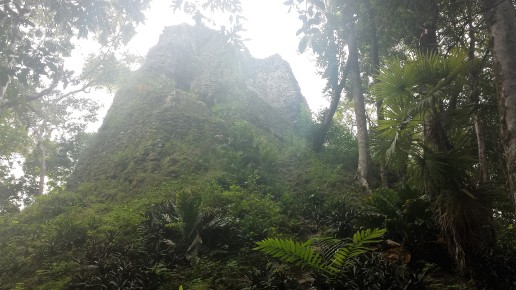 Our guide Kevin Reyes was a young student who had a trainee with him. The benefit of this being that while Kevin was showing us around, his apprentice was looking for wildlife. In this manner, we ended up seeing a wealth of animals that many others missed. We were rewarded right away with 2 troops of howler monkeys – one never gets enough of seeing them! Especially in the luscious jungle where ancient monuments would disappear under the thick vegetation, it was indeed magical. My favorite sighting of the day was 5 toucans on top of a tree. I hadn’t realized how big they actually are and their beaks are an absolute wonder!  We saw pretty much every animal we wanted to see and were rewarded by the extremely rare sight of the Crested Guan, a bird on the extinction list! Tiffany really wanted to see pizotes but so far nothing. After we parted ways with our guides we decided to stop for lunch and wander about.  It is then that we came across a whole herd of them, with babies in tow! They are the cutest things ever! At one point, one went to a shallow pool of water to drink and Tiffany joked that if he were to jump in for a bath she would die of cuteness overload! 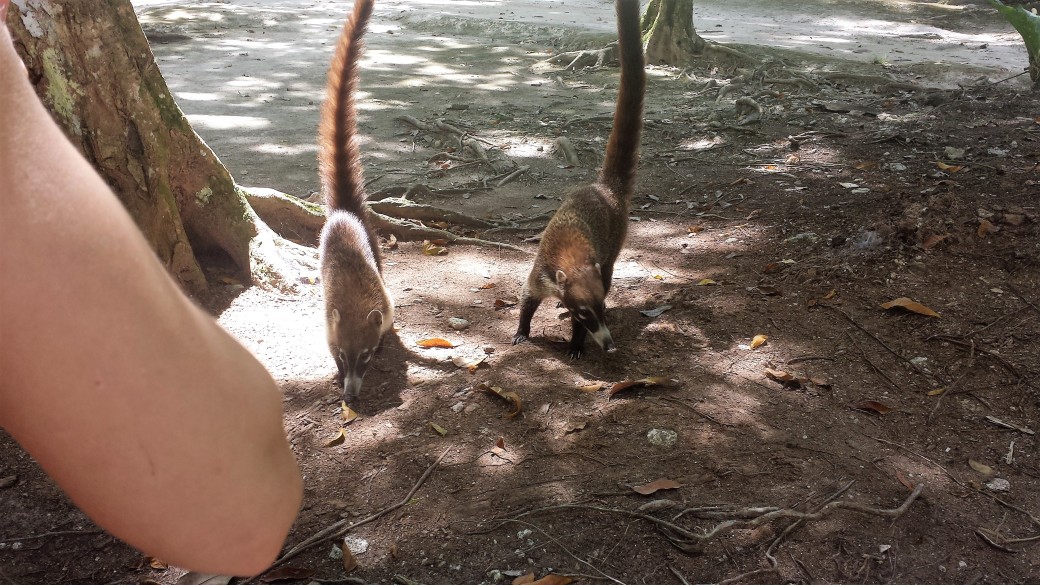 What was wonderful about our visit of Tikal was that in the grand scheme of things, very few visitors come in early. Those who do end up spreading out so that the whole time we were there, it felt that we had the site to ourselves, except in the main courtyard where everyone would pool in. The throngs of tourists didn’t start to come in until may be noon, when we were just about finished our visit. The early morning light also added to the magic of the place, with the monkeys howling from the canopy. A lot of the buildings are still covered by vegetation, some are just barely excavated out of their jungle tomb and the largest and most famous ones are erect in their full glory. 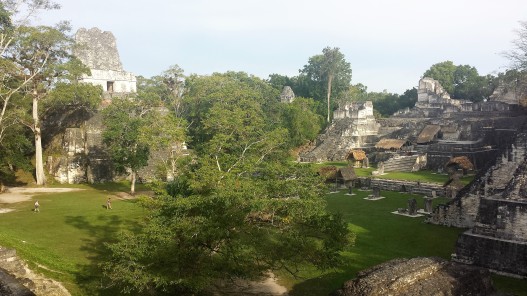 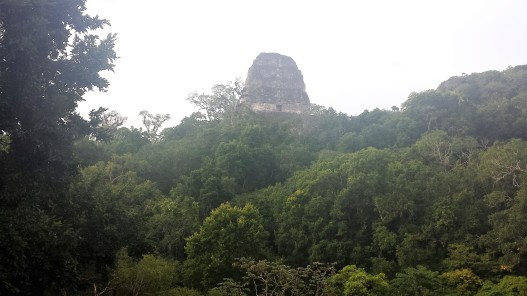 We were given free time to explore the main courtyard and climb the monuments.

A highlight for me, and I’m sure for every visitor, was the steep climb to the top of the pyramid named Temple VI.  From the top we had a breathtaking view of the jungle’s canopy with various pyramids and buildings jutting out. From there one could really see the extent of this archeological site, spreading as far as the horizon.  We had only visited but a tiny portion of it, most of it still undiscovered or unexcavated! 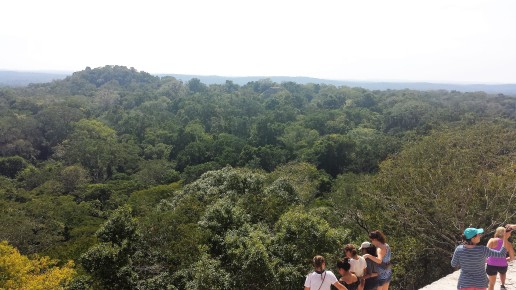 Watch this video of Tikal on my YouTube channel: https://www.youtube.com/watch?v=wJNCUnTu1t0&feature=youtu.be

We got “home” just in time for a cooling dip in the lake and another breathtaking sunset – the following day we would take off again for a 2 days drive to Semuc Champey.  Another must see area of Guatemala!