I will not pretend to have seen Queretaro and will not comment on its touristic center because I never made it there.

From San Miguel de Allende you enter Queretaro via highway # 57. The entrance into this big industrial city is not very appealing. The roads are lined with huge international factories, including Nestle to my surprise. You then make your way into town, where highway # 57 turns into a complex eight-lane boulevard with an extra 2 lanes on each side to access the side businesses. The signage was confusing, telling you to merge into the side lanes and a few meters later telling you to go back to the main boulevard. It was very frustrating, especially when you drive a 27 foot long truck that cannot easily weave in and out of traffic. It was noon and the traffic was congested and intense with huge trucks driving like crazy, and believe me Mexicans still find a way to drive like crazy at 40km/h! I was really not comfortable and made the decision to just get out of there as soon as possible,  too bad for El Centro, but I was not going to try to find it in this kind of traffic. So I decided to follow the signs for Mexico City instead, which happened to be in the same direction as the touristic center.  I was waiting for the turn off where traffic would finally start to flow.

I was stopped in traffic when I felt the distinctive jolt of someone rear-ending me!

Getting out of the vehicle to assess the damage was dangerous because traffic had resumed and I was in the middle lane. I found out that I was hit by a commercial truck. The middle aged driver had kind eyes and like me didn’t quite know what to do. His bumper had hit my spare tire, bending the post it is mounted on and in so doing ripped a hole in the back of my truck. My rear bumper was torqued as well, but all in all no major damage. 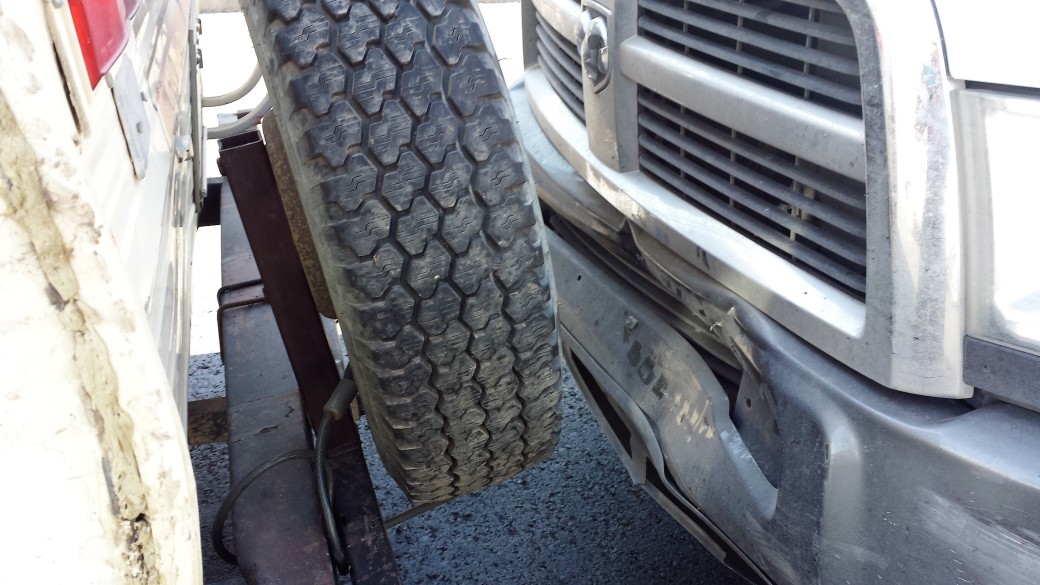 I hesitated, should we call the police or just drive away? Finally he asked me to follow him, I assumed to the nearest police station, but found out that he had taken me to his company. His boss came out, assessed the damage and offered me to pay cash for my repairs. Cash suited me fine.  He offered to give me $1,000 pesos, I had $5,000 in mind at which he laughed.  I had no idea how much it would cost to fix the damages. He finally took me to a mechanic, to do an estimate I thought, but in fact he asked the mechanic to do a quick fix repair job to send me on my way. The bar on which my spare tire was mounted was wobbly and needed to be stabilized. One of the clamps securing it in place was broken and all the mechanic could do in such short notice was fix it and nothing else.

I was still not sure what to do and how much to ask for, so I asked for $2,000 pesos and we settled for $1,500 cash. As he was about to leave for the bank the mechanic’s son told me I should ask for the man’s ID to make sure that he would come back. Oh I thought, good idea – I was completely out of it!

So he gives me his voter’s card, which I learned later is the equivalent of our driver’s license in Canada that we use as our main ID card.

While the mechanic was working on my car, he tells me “this is very high quality metallic beam you have for a bumper and it will cost at least $6,000 pesos to replace it. Do not replace it in Mexico, we do not have that quality here.” Then he added “this man is a very bad man, he is not honest and he has the money. You should tell him that you spoke with your husband in Canada, who spoke with your insurance. Tell him you e-mailed pictures of the damage to your insurance and that they estimate the repairs to be around (and I picked $1,500 Canadian – which would be $21,000 pesos) and that you will not accept less than (I wanted $5,000 pesos) but the mechanic insisted that I asked for  at least $10,000 pesos. “That man has the money” he would say. I really feel that the mechanic was my guardian angel at this point, making sure that my rights were protected. So when the boss came back I gave him my Google translated speech, at which point he refused. I asked him to call his insurance for an adjuster to come and make an estimate, but he argued that it would take 3 to 5 days for someone to come and take a look at the damage. I said that I would not stay in Queretaro for 5 days,  that I was just passing through. In any case, would he pay for my accommodations while I waited? Of course not!  Having had enough of this charade,  I called my Mexican insurance (which I realize now, I should have done right away). My adjuster arrived in 10 minutes! Seeing this, the man quickly calls his insurance and his adjuster arrived in 30 minutes. 3 to 5 days really!

I was very detached from the whole incident, may be a bit confused as to what to do, but  I had no doubt that my interests were being protected. I patiently waited for the  two adjusters to come up with a number and the three of us, each using Google Translate to communicate  finally agreed upon $2,500 cash so that I could fix the vehicle anywhere along the road. My adjuster confirmed that this was a good offer, that my company would probably only have offered 10% more.

$2,500 pesos, that’s $178.57 Canadian dollars people! You certainly cannot repair a car for that price in Canada, but remember, I am in Mexico!

So I agreed to be sent a money order redeemable at a Banorte Bank for the amount of $2,500.

It was 5:00 pm when we finally wrapped everything up. The boss came to shake my hand and apologized. I am not sure if he was apologizing for the accident, for his attitude or may be for both!

I decided to park the RV on the side of a little road and spend the night.

Despite our early departure the next morning we were still caught in traffic, but this being another itinerary we were quickly rerouted outside of town and on our way to Tula.

I never saw Tula as I missed my turn off and didn’t want to back track, but I did stop on the way at a mechanic shop tended by two young guys. One of them did a really good job at jamming wood planks between my two beams to prevent the spare tire mount to wobble and hit the back of the truck again. He also straightened the metallic jagged edges and covered the hole with sealant. I will have it properly sealed with a metallic plaque down the road, but this quick fix only cost me $30 pesos and I gave him $50 because he worked so diligently at it and he reminded me so much of my son, before he joined the army.

So there, no sightseeing in Queretaro, but my little adventure ended up making me a little profit.

I wonder if the fact that I was wearing flowers in my hair and flowy hippy pants that day has anything to do with the fact that the boss probably thought I was a dimwit? 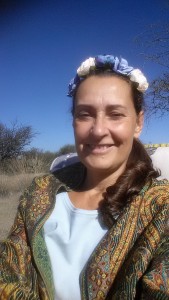 3 thoughts on “Accident in Queretaro!”