I took a conservative 2 days drive from Alamos to Mazatlan. One can perceptively see the difference in vegetation as you cross the Tropic of Cancer. Everything got greener and more lush as I kept driving south. I arrived at Mazatlan Playas early afternoon.  I met a gentleman at an RV park who gave me two options for dry camping in this northern part of town. The first was at the very end of Avenida Sábalo Cerritos, where apparently an Argentinian camped there for 2 weeks without being bothered by the police. It is right in front of a restaurant, he said and you’ll have wifi. The second was to find one of the many roads leading to the beach off an unpaved avenue right next to the train tracks.  Since I wanted quiet and privacy after 2 days on the road, I chose the latter. I found a side road leading to a bluff overlooking the beach. I decided to walk it first for safety, checking for things such as is it wide enough for the truck? Is there room to turn around? Is it level enough for me to park? Is it safe? Satisfied with my deductions I started to drive down the path to find myself stuck in the deep sand just a few meters away!  The one thing I forgot to check was the ground. Because of vegetation it seemed hard enough, but once engaged I discovered too late that the sand was quite deep in places! Undaunted I figured this was just a minor setback and that I was going to shovel my way out of this jam in no time at all!

It was a good thing that a gentleman saw me turn off and was waiting to see how I fared. I came out and asked for help: I am stuck! I said.

Well, he replied, you seem like a pretty resourceful woman. Do you have a shovel? I am pretty sure I do, I replied, wondering if his comment about my resourcefulness meant he was going to leave me fend by myself. We introduced ourselves. Ray is Canadian from Vancouver and owns the Surf’s Up Café down the road. I’ll be back with a shovel he said and off he went.  I desperately tried to shovel my way out, but the truck had sunken too deep in the sand. Bother, what I am to do? And still no sign of Ray… Oh well I can sleep here and figure it out in the morning I thought. But what do I see coming but Ray, followed by a big water truck! My savior! After a few pulls and a tip to the truck driver, I was safely back on the road. Evening was fast approaching and Ray kindly offered that I parked the truck on his property. The café is closed for the next couple of days, why don’t you stay there? You will be safe. I gladly accepted and followed him. I was greeted by a wrought iron gate leading down a long driveway. On the left was the café and on the right was the house – overlooking the beach! What an incredible property. The view was splendid, the buildings beautiful, Ray and his lovely wife Linda had found a piece of paradise and had called it home for 6 years now. 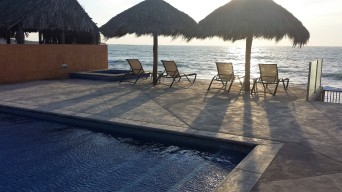 They allowed me to use their electricity and fill up my water tank in the morning. I also used their wifi signal to upload my blog on Alamos. This was a very wonderful and unexpected respite. What a blessing to have met Ray and Linda.

At around noon the next day I decided to leave my hosts and visit Mazatlan. I was looking to find the Malecón, the longest boardwalk in Mexico but couldn’t. I was concerned about not being able to park but was surprised to find the main beach completely empty and the avenue not busy. I parked right there and went for a walk.

Mazatlan is a beautiful ocean resort, with its many hotels, ocean side condominiums, souvenirs shops and many restaurants. I found it very windy and the waves would crash in thunderous clamor. After a few hours of playing tourist, I was anxious to settle down somewhere quiet for the night. Instead of seeking out the city center and the eluding Malecón, I decided to check option number one on Avenida Sábalo Cerritos. I expected the road to end into a parking area next to a restaurant, but instead found that it ended abruptly at the beach and that parking was on either side of the road. To my right it was lined with typical Mexican restaurants overlooking the beach and across the way was a row of souvenir shops. Since I was told that this was a safe area to sleep through the night I parked the RV and went for a walk on the beach with Marley. The place was beautiful, with jutting rocks, crashing waves and an amazing view. 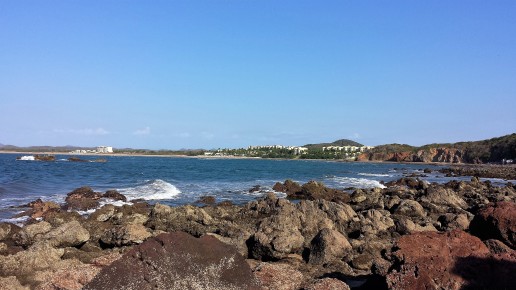 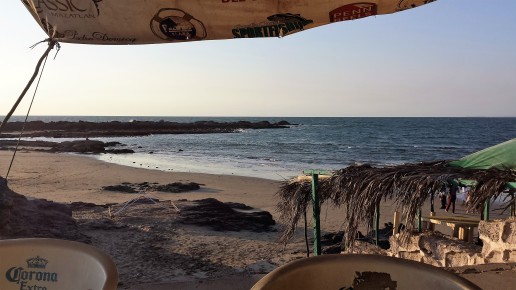 The many restaurants were very appealing and the shops inviting. I spent the following hours browsing the area and decided to treat myself to dinner. I sampled a tostada of seafood, which was delicious – and a bowl of seafood soup which was not so great. There were too many sea snails in it and I must say, as a French girl I prefer my snails with butter and garlic! The broth was ok but paled in comparison to the soup Nadine and I sampled at the Food Fest in Bahia de Kino.

While having diner I watched newlyweds getting their pictures done on the beach. Theirs was a simple intimate affair with just the immediate family attending. Later they would feast on the lower terrace and I looked at the platers the cook would bring out, curious to see what locals have for their wedding dinner. The night was quiet and uneventful. Twice police cruisers patrolled the area without bothering me. 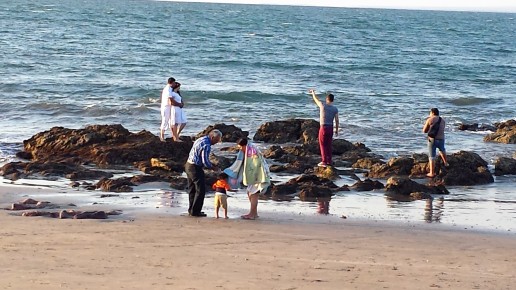 The next morning I woke up at 5:30am to the sound of fishermen parking their beat up trucks all around me to start their day’s work. I got concerned that I would not be able to get out of my parking spot and I was anxious to leave to my next destination. So, after making coffee, I took Marley for a walk on the beach and see if I had room to manoeuver out of my spot. A group of fishermen were leaving already so I harangued them asking if they had caught shrimp in the hope that I might buy some, but they answered they were out for oysters.

I didn’t see much of Mazatlan as I stayed mostly in the northern part of the town and avoided the city center, but I got an appreciation for its resort vibe and can see why it is a popular destination for tourists, be they foreigners or Mexicans.